ORANJESTAD - On Monday, February 3, 2020, the acting Governor of Aruba, Yvonne Lacle-Dirksz, sworn in Mr. J.M.J. Keltjens as vice-president of the Common Court of Justice, with seat in Aruba. 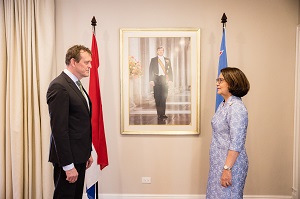 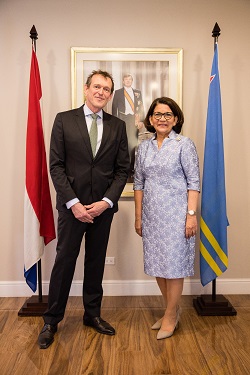 Before Mr. Keltjens came to Aruba, he was a senior judge and chairman of the trade team at the court in The Hague.

The sworn ceremony took place at Cas Ceremonial di Gobernador, in the presence of, among others, the Minister of Justice, the acting Attorney General, Aruba branch manager of the Common Court of Justice and the vice-chairman of the management board.

The Joint Court of Justice of Aruba, Curacao, St. Maarten and of Bonaire, St. Eustatius and Saba is responsible for the administration of justice in first instance and in appeal on the islands. The Court of First Instance of Aruba is located in Aruba and the hearings are also held there. The members of the Joint Court of Justice deal, in first instance and in appeal, with civil cases, criminal cases, and cases of administrative law (tax law among others).

Pictures © Cabinet of the Governor