ORANJESTAD – Ryan Figaroa recently presented 4 copies of a publication about the 75 years history of S.V. Bubali to the library’s director Astrid Britten.

The title of the publication is “Noord’s Pride; 75 Years of S.V. Bubali” and has been written by Jossy Tromp and published in 2018. 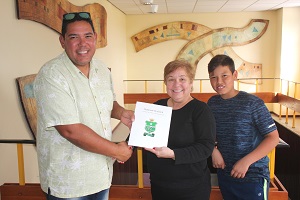 Ryan Figaroa is the current president of S.V. Bubali. This book reviews the 75 years history of S.V. Bubali, from the start to the club to the present organization consisting of 350 members, own field and clubhouse. It also includes detailed information of the players of the Noord soccer team including photos. Due to the significance of the club for the community of Noord, Mr. Jossy Tromp ought it necessary to publish this book.

Jossy Tromp (Aruba, 1954) graduated in Biology and Laws and is former rector at Colegio Arubano and is known in the literary world for his stories and publications like;