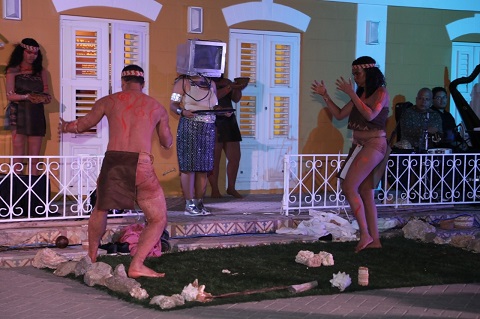 Ad Interim Director Pancho Geerman delivered the opening statements followed by a theatrical performance by the Contemporary Experimental Theatre of the Department of Culture titled ‘Re- discover. ......a reunion with ourselves and our nature”, directed by Fatme Rigaud and Jhon Freddy T. Montoya and performed by Alex Berkley, Amanda Britten, Cayan Faraup and Maria College Mavo students.

The history of the Museum was recollected by Minister Xiomara Ruiz-Maduro who looked back at the archeological development in Aruba and announced she is working on an autonomous foundation for the Museum, and soon Aruba will have museum management.

Guests were delighted with a special “dates” drink called Daçato’ a drink inspired by our indigenous ancestors. Daçato is a combination of the Caiquetio name “Dato” for dates and ‘Maçato’, an alcoholic beverage. 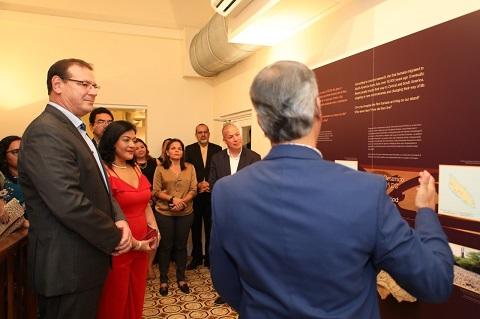 Aruba is known for many traditions, one being the “pouring off a drink for the spirits”. During the reopening ceremony, the spirits of our ancestors were honored when the Governor and Minister poured the Daçato that was in the calabash shell of our ancestors. This concluded what is the new permanent exposition of the National Archeology Museum.

The first exposition tour was given by archaeologist Raymundo Dijkhoff, who guided Governor Boekhoudt, Prime Minister Wever-Croes and Minister Ruiz-Maduro among other Ministers and Members of Parliament.

Guests were also entertained by Amanda Perla during the tour, and after the tour by Mr. Kelkboom on harp, Ryan Maduro on guitar and indigenous music by Jair Britten.

The Government is very grateful for the contribution of the Tourism Product Enhancement Fund (TPEF) in making the Museum operational again.