The Prime Minister of Aruba met with Colombian President Duque.

The Prime Minister and the President talked about different topics of mutual interest, but particularly about the relations between the countries that could be strengthen with more commercial exchanges in healthcare, tourism, and culture, creating more opportunities for both communities. 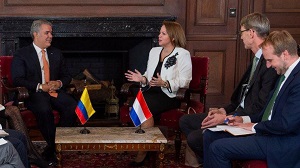 The Prime Minister also expressed her concerns regarding the situation in Venezuela and all its challenges. She also expressed the desire for mutual efforts in combatting organized crimes. The President presented an incentive called the binational committee (Comite Bi-Nacional) in which both countries will select common objectives and work together to accomplish these. The President expressed their commercial interest in Aruba while Aruba expressed interest in Colombian investors. In order to stimulate these trade opportunities, both governments are working on a treaty to avoid double taxation.

The leaders also exchanged ideas on how to increase the opportunities for healthcare. The goal for Aruba is to improve healthcare for its citizens and at the same time reducing healthcare costs.

“It was a good meeting in which we enhanced the relationship between Aruba and Colombia even more,” said Prime Minister Wever-Croes.