General
Carnival is celebrated on Aruba every year since the beginning of the twentieth century. Carnival is actually a sequence of all kinds of festive activities with which one dances into the year immediately after the New Year's celebration.

Economic prosperity in the 1930s also led to a growth of social activities on the island. The first carnival parties in Oranjestad were organized in club buildings. Then parades were organized with trucks decorated with palm leaves. These floats were followed by a few disguised participants.

After their establishment in the 1930s, immigrants from Trinidad and other British islands in the Caribbean began to celebrate carnival in San Nicolas, according the tradition from their homeland.

In 1945 San Nicolas was the place where the first "carnival parade" took place. The parade was initiated by a group of immigrants from Trinidad and the British islands in honor of the victory of the Allies. Three years later, in August 1948, this group received permission to organize a parade in the streets of San Nicolas, this time in honor of the celebration of Queen Wilhelmina's 50th anniversary jubilee. Dressed in costumes, the members of the group danced on steel band music.

Throughout the years carnival was celebrated everywhere on the island and it was only in 1954 that people began to centralize carnival activities. A Central Carnival Commission (CCC) was established and in 1966 the Aruban Carnival Foundation (SAC) was established to organize all Carnival events. 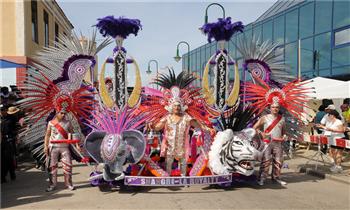 Officially, the carnival season is opened on  November 11 at 11 in the morning. From the first week of January there is much to do on the island.

Carnival starts with a torch parade that brings the 'spirit' of Carnival to life. This very popular parade indicates that the Carnival season has really started and is held on the first Saturday after New Year.

Carnival date
Every year Carnival (the big parade) is celebrated on a different date. When Carnival will take place is calculated from the first Easter day. Easter is decisive for the date of the first Carnival Day.

Easter Sunday is the first Sunday after the first full moon after the beginning of spring (March 21). Then go back seven weeks before the first Carnival Day (or 47 days before 1st Easter Day).

Carnival (the big parade) falls on a Sunday and the party continues until Tuesday, followed by Ash Wednesday (start of the fast that lasts 40 days). This is actually a period in which no meat or extras are eaten. During these 40 days the body has time to clean itself. After fasting comes Easter, the feast of peace, enlightenment, the resurrection of Jesus from the dead. 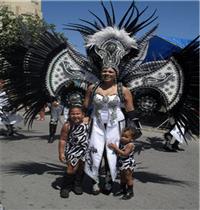 On the Sunday before Ash Wednesday the highlight of the Carnival is the  Grand Carnival Parade in Oranjestad. Eye-popping costumes, body pieces, road pieces and floats in a very luxurious version go through the streets of Oranjestad and get lots of applause from the spectators. This parade is led by the Carnival Queen. The parade starts at 10 o'clock in the morning and ends at sunset.

This organization was founded November 11, 1966 at eleven in eleven in the morning and ceased to exist in 2014.

Every year on the eleventh of the eleventh at eleven minutes past eleven (November 11), S.M.A.C. gives the starting shot for the preparations for the carnival. They put together the program of all activities and ensure that all events run smoothly and smoothly. S.M.A.C. at the end of the Carnival season, awards for the best Carnival group, best road piece, body piece and float and best group.

In the Aruba Carnival schedule 2020 all the activities during this festive period are listed.

Spectators
The Carnival parades would be nothing without spectators. Tens of thousands of people like to watch the dancing and singing participants, the costumes and floats as they enjoy the blaring music.

Here too, an organization is needed. You stand watching for hours, so people prefer to be in the shade. They make sure that they have food and especially drink with them. It is therefore a kind of happy picnic day for family and friends. People ensure that they get a good spot along the road to enjoy the parade. 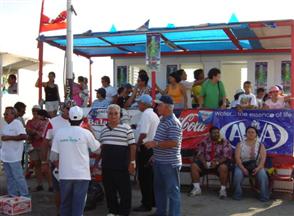 Over the past few years the Department of Infrastructure and Planning (DIP) is in charge with the distribution of the lots. This government department ensures that the lots along the route are distributed fairly. People then put a trailer or a tent along the road. Often you also see scaffolding so that people can sit a little higher up and have a better view of what goes by. They put a.o. their chairs and their music installation. Some companies install tribunes for their employees to enjoy the parades. Many people do their best to nicely decorate their trailer. Some groups of spectators are dressed up in the same T-shirts or wear the same type of cap or hat.

During the parades the streets are full of smiling and dancing people. When the floats are not yet approaching, the audience dances to music from the various music installations along the way.

Fixed figures
Carnival has certain fixed characters and activities. Momo (the Carnival king or Carnival spirit), Prince and Pancho (the prince and the clown), Carnival queen and princesses, the king or queen of Caiso, Soca and Tumba contest.

There are all kinds of elections of princes, queens and musicians / bands. For example Mrs. Carnival, where only women over 26 can participate and the Prince & Pancho who are chosen as the best jokers. There are also many elections for the children, such as the Children's Queen Election. 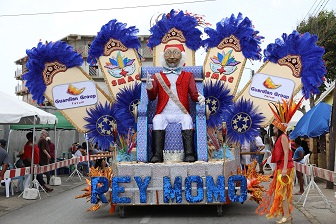 Momo (Kimamento di Momo)
Rey Momo is considered the symbol of pleasure and is represented by a very large straw doll dressed in flamboyant and colorful clothing. At the end of the festivities, on the evening before Ash Wednesday, Rey Momo is burned during an exuberant ceremony. His burning represents the end of Carnival and symbolizes the beginning of the Lent (Lent) period.

Tumba
The celebration of the Carnival has changed over the years and since 1971 the Tumba festival has also been part of this.

The African background of Tumba's first roots in Curaçao and developed from the tambu rhythm, so called because of a special drumbeat brought to Curaçao by the African slaves in the 17th century. Then Tumba spreads to Aruba and Bonaire. On Aruba, Tumba is also very popular during the celebration of our national day on 18 March.

A Tumba king is also chosen and a 'Tumberito' for the youth. And of course you hear all the other music, such as: calypso, bachata, merengue, salsa, house and samba.

Caiso
It is impossible to imagine carnival without calypso and soca. These two are variants of the same rhythm; the heart and soul of the carnival. Both were introduced here by the immigrants from the British islands in the Caribbean, but in the course of time they acquired their own local character.

Calypso
Calypso is a slower version and her main goal is to express your opinion through singing. Instead of telling the events openly, people insinuate through the song. The calypso was developed in Trinidad for the first time at the end of the 18th century and was later introduced to Aruba. The topics of the calypso can vary from political and social criticism and random gossip, but the underlying intention is to challenge society in general, the public or other calypso singers. In this sense, the calypso is comparable to a medieval battle between two knights with swords, but in the case of the calypso it is a battle of singing; music and accompanying texts.

Soca
The 'Soca music' is the music that is most played in the street parades. The road march also originates from Trinidad and is a somewhat faster and happier genre with catchy lyrics and melodies. Its main goal is to let the participants dance for hours and to entertain the spectators with the blaring music.

Mighty Talent (Claudius Phillips) is a very famous Aruban artist with lots of different carnival music songs. He started singing at a young age and has won many prizes in his carnival career. He is also called "The King of Kings".

Meanwhile there are also new generation musicians who provide carnival with new fun songs, such as Buleria, Tsunami and N Fuzion.

Steelbands
At the very beginning of the Carnival celebration on Aruba, the steel bands were a permanent part. Music are made on drums made of, among other things, empty oil drums (steel drums) and dents are hammered in them. Each dent has a different pitch when you play it. With the arrival of music bands that make use of music installations, the steel bands have disappeared a bit from the carnival landscape but in recent years a few steel bands have joined the parade again. 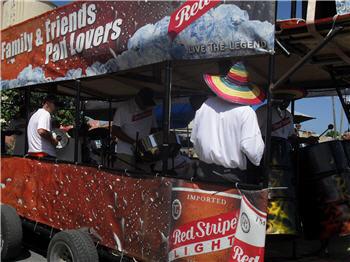 Brass bands / Asambeho
These are bands mostly formed by drummers and trumpeters. A carnival parade is usually opened with a brass band. In recent years, there are not that many brass bands that are participating.

Carnival groups
There are several Carnival associations and groups that participate in the processions. Participating in the parade takes months of preparation. They devise a theme and then start working with this theme. Different designs for costumes and body pieces are made. The last few weeks we have been working hard on cars and costumes. For the costumes people make use of colored, shiny fabrics and decorations so that the costumes can shine.

Costumes
Well-known carnival designers make designs for men, women and children's costumes based on the theme, for example 'Avatar'. One chooses the colors and the fabrics and other materials, such as sequins, glitters, beads, ornamental stones and feathers, which fit in with it. People use a lot of colored, shiny fabric and decorations so that the costumes can shine. They also make costumes and hats or headdresses (headpieces) for the whole group. With some groups, each member provides his or her own costume. Everyone use their own creativity.

Floats
A float is called 'Carosa' in Papiamento. The theme is also depicted creatively on the carosas. Usually the carnival queen of the group is waving at the carosa to the public together with other people. Behind the floats the participants dance in their beautiful costumes and body pieces to the rhythm of carnival music. 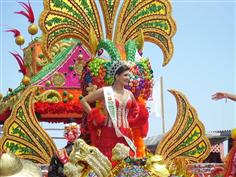 Parades
There are different types of parades. For the children there are, among other things, the balloon parade, the school parades, children's parade and the Noord parade.

The 'Jouvert Morning' in San Nicolas is an exuberant procession with exceptionally enthusiastic participants who starts at four o'clock in the morning and finishes after sunrise. Then you have to get up very early and that's why they call it the 'pajama party'.

A very famous parade is the 'Lighting parade' which is held on a Saturday night. The participants are dressed up in their carnival costume for the big parade, but will light up the costume with lights. Also the floats are completely illuminated and the whole is spectacular to see.

The last group in the parades is formed by a group of enthusiastic dancers among the spectators. All people who want to continue for a while are allowed to dance along. This group is supervised by the police.