The most popular national holiday on Aruba is the day of the national anthem and flag, Dia di Himno y Bandera.

March 18th was chosen for the celebration of the national anthem and flag of Aruba because during the round table conference in the Netherlands, on that date in 1948, for the first time a motion was presented to her Majesty Queen Juliana, which called for the self-determination of the Aruban people. The Aruban delegation was led by Shon A. Eman and the petition was signed by 2147 Arubans. 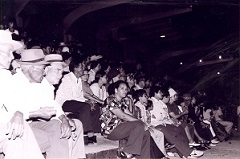 Gilberto François "Betico" Croes is the politician who tirelessly fought for the right of self-determination by the Aruban people. In January 1976 after the Netherlands refused to negotiate a separate settlement for Aruba within the Kingdom, Betico Croes threatened to declare independence unilaterally as per March of 1981. To further strengthen the national consciousness he proposed the inauguration of the Aruban flag and National Anthem as symbols of the identity of a nation. The inauguration hereof took place during a manifestation on March 18 1976 in the Wilhelmina Stadium in Dakota.

While the Aruban flag was being hoisted for the first time in the Wilhelmina Stadium the "Aruba Dushi Tera", a waltz composed by Padu Lampe and the late Rufo Wever, was sung for the first time by the choir of Maybeline Arends-Croes with the musical accompaniment of the Philharmonic Orchestra of Aruba, led by the musician Joy Kock as the Aruban national anthem. The Aruban people were massively present to render their respect to the flag and the anthem. 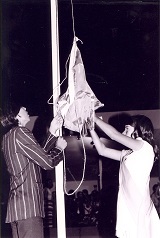 The Aruban flag has 4 colors: yellow, blue, white and red. This is the flag of the Country Aruba, since Aruba obtained her “Status Aparte”, an autonomous country within the Kingdom of the Netherlands, on January 1, 1986.

The national anthem of Aruba is "Aruba Dushi Tera" (Aruba blessed country) and is written in the 50’s by Juan Chabaya Lampe (Padu) with a composition by Rufo Wever. The song was recorded in 1954 by the choir the Trupialen and was sung at all official events. Hubert (Lio) Booi wrote an additional verse  in 1976. The song was so popular among the population, that it was officially introduced on 18 March 1976 as the national anthem of Aruba.

English translation of the National Anthem:

Aruba appreciated homeland
our venerated cradle
you may be small and simple
but yet you are respected.

Oh Aruba dear country
our rock so beloved
our love for you is so strong
that nothing can destroy it. (repeat)

Below you will find the musical notation of the music of the national anthem and the text thereof.