A political agreement between Aruba and the Netherlands

ORANJESTAD - The governments of Aruba and the Netherlands have reached a political agreement on the third tranche of liquidity support 2020.

In this agreement, agreements have been made for a voluntary, but not non-binding, multi-year cooperation between the two countries. 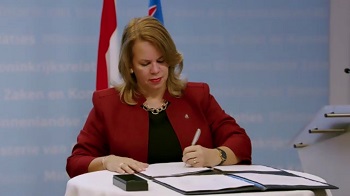 In exchange for reforms in Aruba, the Dutch cabinet will offer new liquidity support but will also invest in several areas of Aruba's development. For example, the Netherlands will support Aruba in the agreed structural reforms. In addition to the continuing liquidity support for the shortages that arose as a result of the Corona crisis, this will also be done with knowledge and expertise. To this end, the Caribbean reform and development body, or COHO for short, has been established, which, together with the ministries in Aruba and consultation with stakeholders, will further elaborate the reforms. This body will also help with the implementation of these reforms. The COHO will not take over any powers from the States, the Government, and the responsible governmental bodies; this has been explicitly agreed upon and recorded in the consultations held. However, the COHO will be enabled to monitor the implementation of the structural reforms and to draw consequences from insufficient cooperation in this respect.

By reaching this agreement, the Netherlands will make 209 million AWG or 105 million euros of liquidity support available to Aruba for the period up to the end of this year. The Netherlands is also helping Aruba with the refinancing of Aruban debt of more than half a billion Aruban florins. This provides the country with an interest rate advantage of more than 80 million AWG, or 40 million euros compared to market financing. Besides, up to 2015, a structural amount of up to 17.9 million euros will become available to strengthen the rule of law in Aruba.

Premier Wever Croes: "This agreement marks the beginning of a new stage for Aruba. Corona has had such a huge impact on Aruba that Aruba alone will not come out of it. Aruba needs help, not only to meet its liquidity needs but also to implement the necessary reforms to build a strong and resilient economic foundation that can withstand future shocks. Aruba is therefore very grateful and grateful to the Netherlands for its support. Together we will work towards a stronger economy, a stronger autonomy for a stronger Aruba". 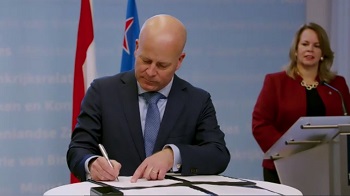 Secretary of State Knops: "With this political agreement, we are working on the necessary structural reforms that will make the economy and society of Aruba sustainably more resilient. Besides reforms, there is also room for investment on the island. Aruba needs to emerge stronger from this crisis because the people of Aruba deserve a social and economic perspective. This political agreement is an important step. But this agreement is not the end of the road. In several areas, such as pension reforms for ministers and state members, Aruba will need to take steps in the short term to qualify for further tranches of liquidity support. The reforms included in the country's package need to be effectively implemented. Only then will the prosperity of Aruban citizens be insight. However, this will require continuous efforts from all parties in Aruba.