ORANJESTAD – Aruba Airport Authority N.V. (AAA) can report as follows on Aruba Airport’s performance for April and May of 2021; two outstanding months so far since the pandemic hit back in March of 2020. 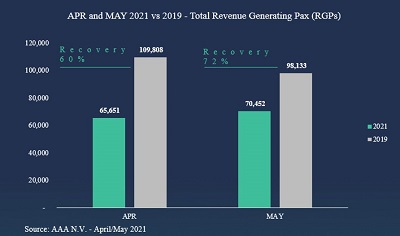 In April and May of 2021, Aruba Airport handled respectively 65,651 and 70,452 departing passengers. April was 40% more than March and May 7% more than April. During the past two months, Aruba Airport recovered 65% of the amount of departing passengers that were handled in 2019 during those same months. In April and May 2021, 120,320 passengers (pax) traveled to the US, 7,131 pax to Europe, 2,468 pax to the Netherlands Antilles, and 6,184 pax to Latin America. The total departures during April and May are 69% more than what was forecasted for this period. 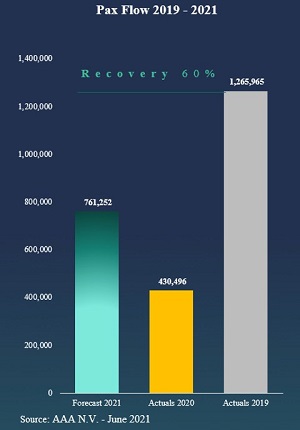 An average outbound passenger load factor (PLF) (number of seats of the total seats onboard an aircraft that are occupied when departing from Aruba Airport) for the US Market of 71% (*) was reported during April and May 2021, while the average PLF for all markets was at 68% during that same period (in comparison to 2019 where an average PLF for all markets of 85% was reached).