Aruba is on the WHO list as an authorized port to provide the Ship Sanitation Certificate.

ORANJESTAD – The Department of Public Health (DVG) announced that the WHO has added the Aruba Ports Authority to their Ship Sanitation Certification list.

The WHO is in charge of advising on the international control policy for transmittable diseases. They set prevention regulations, including the International Health Regulations (IHR). IHR is a regulation agreed upon by 196 countries, including the Netherlands (also Aruba), to reinforce their capacity to detect, analyze, report, and respond to public health risks. 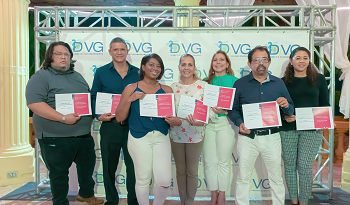 One of the capacities under this regulation included the authority of countries to issue Ship Sanitation Certificates to prevent the transmission of diseases on boats, cruise ships, etc. During the first week of October 2022, a delegation of the Dutch RIVM was in Aruba to give the Ship Sanitation Certificate course to the authorities of the Kingdom of the Netherlands islands, including Aruba. During the course, they learned about the International Health Regulations (IHR) requirements to issue this certificate to ships. The Sanitation Certificate is valid for six months. Without this certificate, ports around the globe can deny entry to ships and boats as they would consider these as potential sources of contamination.

As a result, Aruba lost its authority to inspect boats and ships and issue health certifications.

One of the compulsory requirements was for Aruba to adapt its laws, and the inspectors had to be trained specifically for the International Health Regulations.

The personnel of the Goods Inspection and Hygiene Department of the DVG completed the course in just three weeks and received the certificate. They are now on the WHO list as a port where boats and ships can apply for a Ship Sanitation Certificate.

The Minister of Public Health, Dangui Oduber, congratulates the seven employees of the Commodities Inspection and Hygiene Department of the DVG for obtaining the authority to issue these certifications.