The Minister of Tourism and the Aruba Airport Authority negotiated with Frontier Airlines for some time, which resulted in the inaugural flight. 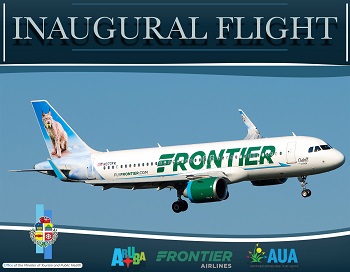 Frontier Airlines is an ultra-low-cost carrier based in Denver, Colorado, and uses the Miami International Airport as a hub to Aruba. 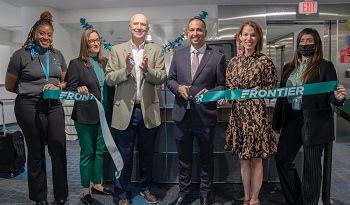 Frontier Airlines has over 100 routes, of which 30 routes connect to Aruba. Now, travelers can use Frontier Airlines as an option at lower prices. According to the minister, it fits perfectly with the government's vision to diversify in the large US market. Do not rule out the possibility of getting direct flights from Denver in the future. The minister indicated that the forecast for 2022 is looking very positive. The amount of available seats for 2022 forecasts an increase compared to 2019, a record year in tourism for Aruba. This inaugural flight shows the confidence of Frontier Airlines in Aruba as a destination. Although the world is undergoing tough times caused by the pandemic, Frontier Airlines took the initiative and added Aruba to their itinerary from Miami. 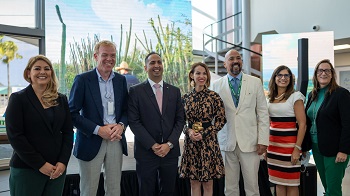 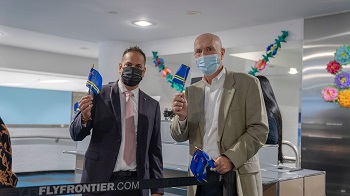 Frontier Airlines is currently the greenest airline in the United States, and they are committed to protecting nature. They have a fleet consisting of 100 new Airbus A-320 Neo. These aircraft have a lower carbon emission compared to other aircraft.

The government’s policy and vision are based on sustainable tourism, and Frontier’s philosophy is a perfect match.

Each one of these aircraft has a different tail design with an image of a protected animal. These serve to educate us about the endangered mammals or birds that are in danger of becoming extinct. Aruba is competing with a local bird, “Kiki e Prikichi” to win a spot on the tail of one of their aircraft. They will announce the winner in January 2022.