ORANJESTAD - The Directorate of Nature and Environment (DNM) as a member of the United Nations Environment Program UNEP’s Caribbean Environment Program section, will participate in the virtual meeting concerning the technical and scientific aspects of the “Land-Based Sources of Pollution”, (LBS) and “Specially Protected Areas of Wildlife” (SPAW) from March 15 to March 19, 2021.

The Protocol Concerning Pollution from Land-Based Sources and Activities (LBS Protocol) to the Cartagena Convention was adopted in Oranjestad, Aruba, on October 6, 1999. But it was not until 2010 that it went into effect and became part of the 3 protocols of the Cartagena Convention. The LBS includes the goals and obligations that need to be reached to reduce the negative impact that the ‘Land-Based Pollution’ in the Wider Caribbean can have on the environment and for humans. The LBS addresses topics like pollution, sewage, chemical waste like insecticides, emissions from engines and industries in the environment. They address other technical and scientific aspects like investigation and monitoring of the LBS effects as well.

The Caribbean ocean is a natural resource that is very important for the tourism economy, fishery, and recreation of the people. It is remarkable to say that Aruba still needs to ratify the LBS protocols within their local laws. 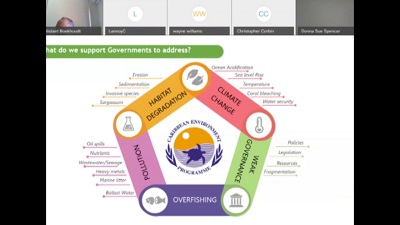 Aruba however, actively participates with voting rights, in meetings and decision-making concerning the SPAW. This is a protocol for the protection and development of the marine environment for the wider Caribbean region indicated in the Cartagena Convention of 1983. This is the only treaty of the Caribbean region that stands for the environmental protection of the ocean and coastal ecosystem and promoting regional cooperation and sustainable development of the natural resources concerning marine and coastal life. In 1990, the members of the Cartagena Convention adopted the protocol concerning the ‘Specially Protected Areas and Wildlife (SPAW). This is the regional agreement for the management and conservation of biodiversity in the Caribbean region. In 2000, the SPAW protocol became international law. One of the obligations of this treaty stipulates both nationally or regionally, the cooperation measures for the protection of animal and plant species. The treaty, however also extends to the establishment of the protected areas and areas known as buffer zones. A buffer zone is an area where rules and measures are not applied strictly. These serve as areas for research on the impact of certain behavior on the environment, measure the amount of time it takes to see certain results of human behavior in these areas, whatever the outcome. With the explanation of these protocols and the participation of the DNM in this virtual meeting, they now have more clarity about the critical topics concerning waste management in the Caribbean area.

Aruba is part of the Caribbean and the UNEP, and partners in the protection of the terrestrial and coastal ecosystem which are in benefit of our nature and environment in general. This meeting provided plenty of important information on scientific and technical research, usually almost impossible for one single country to achieve.

For more information please click on the following link: https://www.youtube.com/results?search_query=(175)+Cartagena+Convention+Secretariat+Video+Presentation+