ORANJESTAD - In early April 2022, Minister of Integrity, Transport, Nature and Elderly Care, Ursell Arends, and the Post Aruba, launched an awareness campaign regarding the National Plan for Stray Animals (NPSA). This campaign raises awareness of the responsibility to keep their dogs in their respective yard/ property as stated in the Dog Law.

The Dog Law (Dog Ordinance) states the responsibilities, duties, and authority of the Police Department, Bureau City Inspector, and the community concerning dogs. 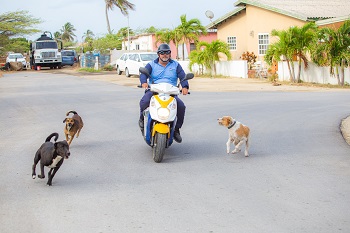 It is essential to know the responsibilities of everyone. The owners must keep their dog(s) on their property, whether fenced or not and per law. They have the authority to make decisions regarding the well-being of their pet. Enforcement and execution of the Dog Law is the responsibility of the Police Department but also the Bureau City Inspector.

In the awareness campaign with the Post Aruba N.V., they encouraged responsible behavior from dog owners. Dog owners can receive the first warning when the authorities detect the dog in public areas. The second  yard, the owner will get a fine.

The government urges the community to comply with the dog law and be more civic and responsible.