ORANJESTAD - After the informateurs (mediators), Mr. Eddy Werleman and Ms. Tisa LaSorte on July 8 handed over the declaration of willingness to the Governor of Aruba, His Excellency Alfonso Boekhoudt, Ms. Evelyn Wever-Croes, party leader of Movemento Electoral di Pueblo (M.E.P.), today handed over the declaration of intent to the Governor that the party leaders of M.E.P. and RAIZ signed last night.

Today the final report of the informateurs was also submitted to Governor Boekhoudt. This officially concludes the information round. 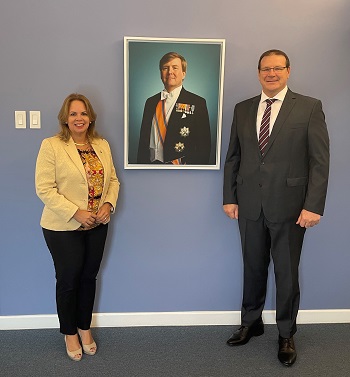 In line with the final report of the informateurs and given the signed declaration of willingness and intent, on Friday, July 9, Governor Boekhoudt appointed Mrs. Evelyn Wever-Croes as formateur. The Governor requested her to form a stable cabinet that enjoys the confidence of the Parliamentary parties of MEP and RAIZ and that consists of persons who are willing and able to reach a common policy aimed at the financial and socio-economic recovery of Aruba, in particular the further interpretation and implementation of the Land Package.

Part of the formation task is the drafting of a coalition agreement between the M.E.P. and RAIZ and a portfolio division within the new cabinet. Finally, the suitability of the candidates for the office of Minister and Authorized Minister must be tested in advance on the basis of the procedures specified in the National Decree of September 9, 2013.

On August 9 at the latest, the formateur should report in writing to Governor Boekhoudt about her findings. In the meantime, the formateur will inform the Governor orally or, if necessary, in writing about the progress in the implementation of the formation task.

The leaders of the political groups in the States have been informed in writing of the formation order and of the fact that Mrs. Evelyn Wever-Croes has kept it under consideration. If the formation succeeds, the formateur will, as usual, formally accept the assignment. The group leaders have been called upon to provide full cooperation in carrying out the formation assignment.