ORANJESTAD - The Governor of Aruba, His Excellency Alfonso Boekhoudt, paid a working visit to the Marine Barracks Savaneta (MSKSAV) on Friday, May 21 as part of a swearing-in ceremony.

Eight military personnel took their oath or promise in the presence of their family members as the final step to officially join the ARUMIL. 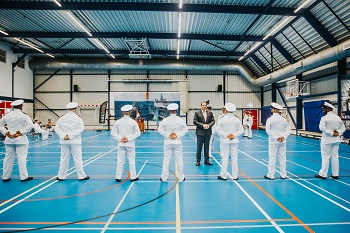 Before this moment the soldiers followed a six-month training in Curacao. After its successful completion last March, they already received their berets. After a short follow-up training in Aruba, they completed the course today with the swearing-in ceremony.

By taking the oath or pledge, the soldiers swear allegiance to the King, obedience to the laws, and submission to military judicial system.

After the ceremony, Governor Boekhoudt spoke briefly with the sworn-in soldiers, after which he was escorted out to the A-1 for departure from the barracks.