“Landspakket” and implementation agenda explained in a public session

ORANJESTAD - Negotiations between Aruba and the Netherlands will proceed with regards to the conditions set to obtain the financial support to cover the Government expenses.

Last year, due to the Covid-19 pandemic, the Government lost 40% of taxes and could not cover its expenses.

That was the main reason that the Aruban Government refused to sign in the first instance when presented with the harsh conditions. Instead, the Prime Minister took her time to negotiate and soften the conditions. 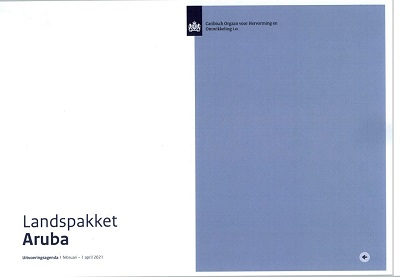 On November 13, 2020, the Government of Aruba and the Netherlands reached a mutual agreement.

The conditions of the “Landspakket” are known and were published. Since November 13, 2020, both parties negotiated on the timeline for the implementation of the different conditions that lead to an “Implementation Agenda” signed on February 1, 2021.

On January 29, 2021, the Prime Minister elaborated thoroughly on the implementation agenda during a summit with the unions representing the public sector, semipublic sector, private sector, and Government’s mediator but also in a press conference held on February 1, 2021.

On February 2, 2021, the Government finally received the official implementation plan and forwarded it to the Parliament for discussion, and published it for everyone to read the conditions agreed.

According to the Prime Minister, the “landspakket” is very elaborate and is constantly being worked on by a big team. The focus is to investigate, study and screen in all the areas during the upcoming months. Subjects addressed are finance, economy, taxes, public sector expenses, wages public workers, economic reforms, labor, healthcare, education, and justice. The focus is to investigate how these are in Aruba and compare them with Curacao and Sint Maarten and based on the conclusions make needed changes where necessary.

The focus during the coming days is on the studies that were being done. There is still no final decision. The Prime Minister assured the unions that, as soon as they discuss the subjects regarding their particular sector, they will involve them in the discussions before taking any decision. The Parliament requested a thorough explanation by the Government about the “Landspakket “ and the “Implementation Agenda”.

All Ministers will explain their corresponding parts in the implementation plan.

The Government urges the public to follow the live session on social media.