Launch of the Aruba Fair Trade Authority: a structural change for our economy

ORANJESTAD – On September 15, 2022, the Minister of Economic Affairs, Mr. Geoffrey Wever, announced the launching of the path to the implementation of the Aruba Fair Trade Authority (AFTA).

The Aruba Fair Trade Authority is a legal entity with the main task of creating fair competition and is in charge of implementing and supervising competition laws.

The unrestricted competition for all companies in the country encourages investment and trade development.

Most developed countries have a competition authority similar to AFTA to prevent consumer abuse. For years professionals researched and enacted a competition law passed by the Parliament of Aruba in 2020. 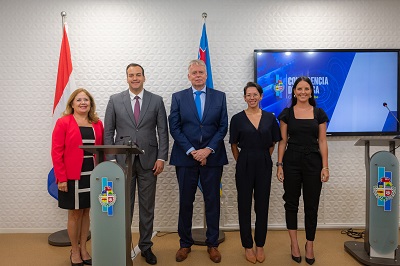 The director is very grateful to the director of the Department of Economic Affairs, Industry and Trade, Mrs. Maria Dijkhoff-Pita, for her commitment to this project. They have also introduced a team of experts responsible for implementing the AFTA, namely: Mr. Albert Scholten, Ms. Amanda Maduro and Ms. Carondina Leijdekkers.

The Minister thanks his fellow ministers for their support by allocating additional resources to implement AFTA. They also recognize the essential role of the Netherlands in their generous financial support of 620,000 guilders to implement AFTA.

Albert Scholten is an international expert on competition and presented what AFTA will mean for Aruba. Mr. Scholten underlined that AFTA benefits consumers, businesses, and the economy. Micro and open economies will also benefit from an agency like AFTA. Mr. Scholten explains that more than 125 countries have competition authorities. Competition is beneficial for the economy.

Mr. Scholten stated that this is a significant moment for Aruba's economy. He believes that AFTA would bring about structural and essential changes for our economy and consumers. Today everyone can be proud that Aruba has its competition authority with the consumers in mind," the Minister stated.