ORANJESTAD – Recently the Minister of Finance, Economic Affairsand Culture Mrs. Xiomara Ruiz Maduro, met with the Minister of Economic Development of Curacao, Mrs. Giselle Mc William in which they discussed the possibilities of economic cooperation between the islands Aruba and Curacao.

The Ministers announced a consensus on the topic of “Certificate of Origin”. This form, that replaces European form, will facilitate commerce between the islands,

The Certificate of Origin is a digital form that facilitates the entire commercial process starting January 1, 2020. This form will be used in connection with the free commerce between Aruba and Curacao.

The Minister is certain that this is much-anticipated news for the commercial sector of both islands. 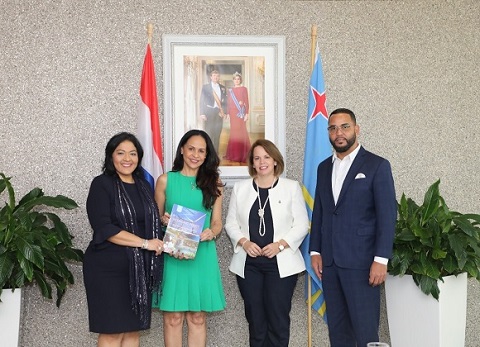 Minister Ruiz Maduro also announced the culmination of the negotiations regarding the Free Zone of Aruba and Curacao and that soon the Free Trade Agreement will be signed.

This means that products produced in Aruba can be traded in Curacao without any restrictions and vice versa.

This is positive news for the local economies and should create more economic activity and create more job opportunities.

A meeting was also held with the Prime Minister Wever-Croes and Minister Romero, in order to discuss the possibilities of using the Don Andres ship to connect the islands.

Another topic of discussion is the status of the Fast Ferry, which according to the Minister of Curacao, is in an advanced stage. The financial aspects have been approved and will soon be formalized.

Various aspects were discussed to realize this project.

Minister Ruiz-Maduro thanked Minister Mc William and her delegation for initiating the meeting in Aruba and discuss these important topics. The minister showed great appreciation to the Department of Economic Affairs and Aruba Customs for their input.