Meetings during the 74th Session of the UN General

ORANJESTAD –The 74th Session of the UN General took place in New York during the week of September 23 to 27, 2019.

Aruba also attended several meetings as part of the Kingdom of the Netherlands.

The Prime Minister of Aruba, Mrs. Evelyn Wever-Croes attended multiple meetings regarding the Sustainable Development Goals (SDGs). These are the 17 goals stipulated by the UN to help create a better world by 2030. Aruba has compromised with these goals as well. Goals like fighting poverty and famine, proper education, clean water and sanitation, and gender equality. 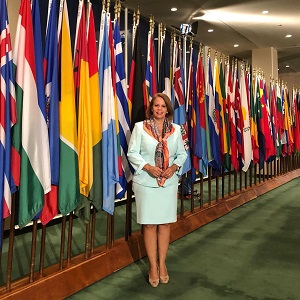 The last-mentioned two SDGs are priorities for the Prime Minister and she has addressed these during most of her meetings and has reached some valuable agreements. The UN can certainly assist Aruba with the creation of policies on these SDGs.

Topics like corruption and good Governance were also discussed during the meetings including topics like digitalization and e-Governance. In addition the Prime Minister held meetings with the World Economic Forum (WEF) and the OECD organization again addressing the issues and reaching important agreements.

The Prime Minister used the opportunity to meet with regional leaders during the UN General Assembly to discuss the ongoing situation in Venezuela. The Prime Minister met with the Ambassador of the Dutch Kingdom based in Washington where she received updates on the latest developments.

The Prime Minister also met with under Secretary of State David Hale discussing Caribbean issues. This was another import meeting related to the Kingdom of the Netherlands.

Finally, she attended another Kingdom related meeting where she met His Excellency the Dutch King Willem Alexander and Queen Maxima, in a setting with the Kingdom’s four Prime Ministers and discussed the relations within the Kingdom in general and the cooperation between the countries.

On the photo: The Secretary-General of the United Nations Mr. António Guterres, King Willem Alexander, Queen Maxima, the four Prime Ministers of the Dutch Kingdom, PM Evelyn Wever-Croes of Aruba, PM Leona Marlin Romeo of St-Maarten, PM Eugene Rhuggenaath of Curacao and PM Mark Rutte of the Netherlands. Also on the photo is Minister Blok of the Netherlands and Minister Kaag from the Netherlands.