MoU with Citgo signed in Aruba

ORANJESTAD – On October 14, 2019, Mr. Renny Arends, who is in charge of Refineria di Aruba (RdA) and Prime Minister Evelyn Wever-Croes signed the Memorandum of Understanding with Citgo.

The MoU was first signed in the USA and now it was Aruba’s turn to sign it too. 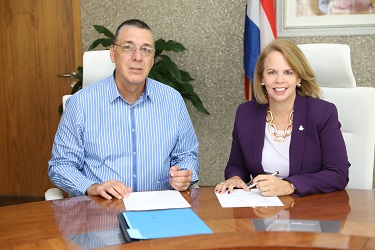 Last week, October 9, 2019, the Government of Aruba announced that it reached an agreement with Citgo to obtain the keys of the refinery and it’s terminal.

This will grant Aruba the opportunity to seek other interests for the operation of the refinery, dock, and terminal.

With a signed MoU, the Government of Aruba can start negotiations with interested parties.

There are currently more than 25 companies that expressed interest yet the Government could not negotiate with any of them to see how serious they are about this. With the reached agreement they can finally negotiate with these companies. The Government will actively seek investors, among others by organizing a road in Houston, targeting serious companies to trigger their interest to invest in Aruba,A negotiation committee is in the making and complying with the requests from the union, it will include employees of the refinery.

The Government is seeking serious partners:

With the signing of the MoU, the Government will regain control of the terminal and tank farm. Despite the lack of maintenance of the tanks, they are of great value. The Government hopes the refinery will once more become a very lucrative business that generates plenty of income for the Government and plenty of job opportunities.

The starting point of the negotiations is the retention of employees, at-least as many employees as possible, with the new operator. In contrary to the previously made promise that Citgo would take care of the employees’ wages plus active service years until a new operator is in place, Citgo announced it had no funds to cover these costs. Nevertheless, the Government of Aruba stipulated that Citgo should pay all its debts with the employees, contractors and other vendors. Premier Evelyn Wever-Croes indicated that her biggest concern was that of the employees and that their interests should come first.