ORANJESTAD - On Wednesday morning July 1, the Governor of Aruba, H.E. Alfonso Boekhoudt, and the commander of the Marine Barracks Savaneta, LTKOLMARNS Art van Beekhuizen, promoted Mike Ligtvoet to the captain of the marines of Aruba.

The promotion of Captain Ligtvoet coincides with the start of his new position as adjutant to the Governor. He replaces Lieutenant-at-sea 2nd class oldest category, Bart Breitenstein. Captain Mike Ligtvoet was born in Leidendorp in 1992. He started his career with the Royal Netherlands Navy in 2009 as a Marine with the Marine Corps. In 2016 he transferred to the Aruban Militia, where he completed the officer training in the same year. Before his position as adjutant to the Governor, he served as troop commander at the Marine Barracks Savaneta. 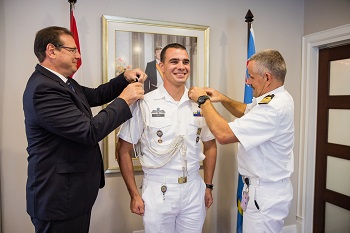