On January 12 and 13, Aruba, Curacao St. Maarten, and the Netherlands will deliberate on the democratic deficit

ORANJESTAD – On January 12 and 13, 2022, there is a meeting between the Prime Ministers of Aruba, Curacao St. Maarten, and the Secretary of State, Alexandra van Huffelen.

The agenda point is the Democratic Deficit in the Kingdom of the Netherlands at the moment of decision-making. 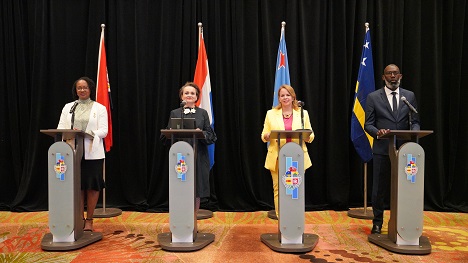 Prime Minister Evelyn Wever – Croes explains that on various occasions, the Netherlands is the country that imposes and takes decisions. During the pandemic, the Kingdom of the Netherlands’ countries felt this more than ever. Hence, they compromised to handle this issue when time is available, which also took place.

In connection herewith, Aruba started consultations with different organizations to get their input on what they perceive as a democratic deficit and how to minimalize and eliminate it.

Based on the input received till January 12, before said meetings, the government will determine the position of the country Aruba. It requested input from, among others, the Parliament of Aruba, the High Colleges of State, the University of Aruba, and the Foundation Good Governance of Aruba. The Prime Minister emphasizes that the stakeholders’ input is essential to get their feedback, thus not only from the government.

The reality is that there is a significant democratic deficit in the Kingdom of the Netherlands. Prime Minister Wever-Croes stated that it is essential for each country to set their expectation on this topic.

In conclusion, the Prime Minister stated that it is essential for Aruba, if the elimination of the democratic deficit is not possible in the short term, to start with a dispute settlement. It is an arrangement to safeguard the right of Aruba to fight for this issue, in case a dispute arises with the Netherlands.