Preliminary study by the IMF on government personnel costs

ORANJESTAD – Recently the Minister of Economic Affairs, Finance and Culture Xiomara Ruiz-Maduro informed that during two weeks the experts of the International Monetary Fund (IMF) did an investigation on the personnel costs of the Aruban government. 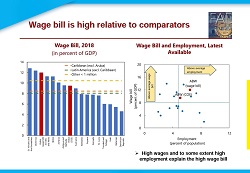 Public wage and interest costs are the two biggest components of government expenses on the budget. The reason for this investigation is for the government to get a good picture of the wage costs when making decisions. Wage costs cannot continue to increase and the government has to contemplate lowering them to reach a manageable and sustainable public finance. 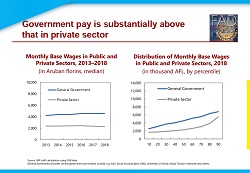 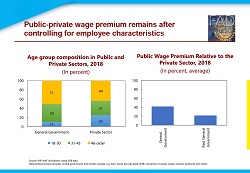 As regards the age component, the age of the public sector employees is increasing. This means that eventually, a great number of government employees will reach retirement age. This entails a challenge since the pension age was increased. 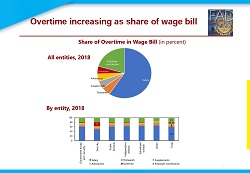 Overtime costs are also one of the components that increase personnel costs. The overtime component comprises 5% of total personnel costs. To reach this percentage, the IMF experts use the figures from 2018. The budget of the Department of Justice has higher overtime costs since overtime pay entails 17% of its budget. Further investigation is required to analyze the reason for overtime.