ORANJESTAD - Prime Minister of Aruba Evelyn Wever-Croes was in Europe for a week and a half.

It was a fruitful journey where concrete work agreements were made.

The journey of the Prime Minister began in Estonia where she attended the e-Governance Conference. She was one of the speakers in the panel. Aruba has reached an agreement with the e-Governance Academy of Estonia for assistance in a roadmap to e-Government. The new government of Aruba, Cabinet Wever-Croes has integrity and innovation as its driving force, and e-Government brings the necessary transparency in government actions that is needed to support the integrity process. In addition, e-Government will contribute to faster decision-making needed to promote the economy. 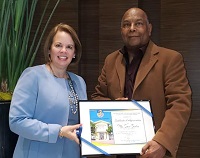 In Estonia, the Prime Minister also met with President Kersti Kaljulaid. On behalf of the government of Aruba, she also handed over a recognition to the Aruban Dave Benton who lives in Estonia and who won the Eurovision Song Contest for Estonia in 2001. The Premier looks back on fruitful discussions and looks forward to a fruitful collaboration with Estonia. 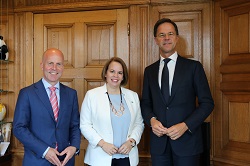 The Prime Minister then went to The Hague to meet with Prime Minister Rutte, State Secretary Knops, the Upper House and Lower House. The goal is to emphasize that the Venezuela crisis has a major impact on the islands of Aruba and Curacao. The crisis is no longer a crisis of Venezuela alone, nor of the region alone, it is a global crisis and the global community must help bear the pressure and burdens. The Premier is very pleased with the fact that the Dutch government is reserving 23.8 million euros for this crisis, in particular in terms of expertise and equipment. The impact of the Venezuela crisis on public finances is large. An evaluation will be made after the figures for the first half year are known. "I think it is important that people in The Hague hear from me about the situation in Aruba, so that they are better able to assist us, if necessary".

To conclude the journey, the prime minister was invited to a private audience with Pope Francis in Rome. During the audience, the prime minister told about Aruba, and about the Venezuela crisis. The Pope knows the situation and has given a special blessing to Aruba, Bonaire, Curacao and Venezuela at the Prime Minister's request. 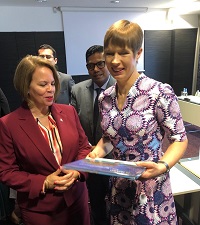