ORANJESTAD - On Wednesday, January 26, 2022, the Governor of Aruba, H.E. Alfonso Boekhoudt, and the Commander of the Marine Barracks Savaneta, LTKOLMARNS Art van Beekhuizen, promoted Lieutenant of the Marines Frank Plomp to Captain of the Marines. 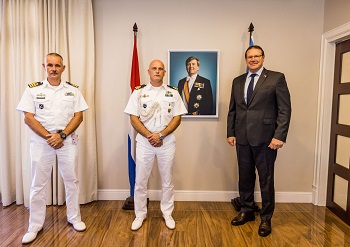 The promotion took place at Cas Ceremonial di Gobernador. The promotion of Captain Plomp coincides with the start of his new position as Adjutant to the Governor of Aruba. He replaces Captain of the Marines of Aruba, Mike Ligtvoet. Captain Plomp started his career in 1987 as Marine 1 General.

His career is characterized by various operational placements and deployments. In recent years, Frank Plomp has served as Head of Training Unit at the Marine Training Center in Rotterdam and has been involved in the development of the new Marine Barracks in Nieuw-Millingen. He also has some years of experience with Aruba as he worked at Marine Barracks Savaneta from 2011 to 2015.