ORANJESTAD - On Monday, April 26, 2021, at 07:00 (local time), the special edition of the Official Gazette was published containing the list of Royal Distinctions granted this year.

Traditionally, this festive moment, also known as the General Occasion, has been linked to the birthday of His Majesty the King, being the Grand Master of the Knighthoods. An award can be presented to people who have rendered special service to society.

This year, 33 Aruban citizens were awarded. Just like last year, the Governor of Aruba, His Excellency Alfonso Boekhoudt, telephoned the persons being decorated in advance to inform them that they were eligible for a Royal decoration and to congratulate them on this. This year's Aruban "Ribbon Rain" will take place on Friday, April 30. 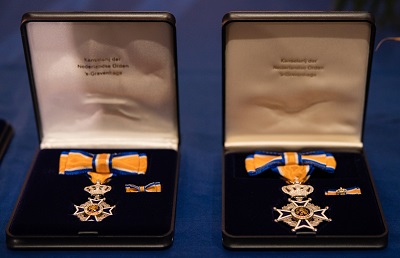 The following persons will be decorated as 'Ridder in de Orde van Oranje-Nassau, bij bevordering':

The following persons will be decorated as 'Ridder in de Orde van Oranje-Nassau':

The following persons are decorated as 'Member in the Order of Oranje-Nassau':