ORANJESTAD – October is a month in which we have the opportunity to stand still and focus and create awareness on breast cancer. 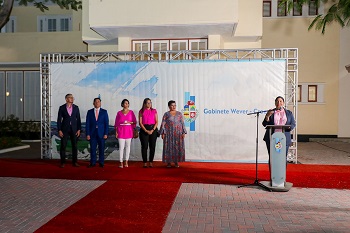 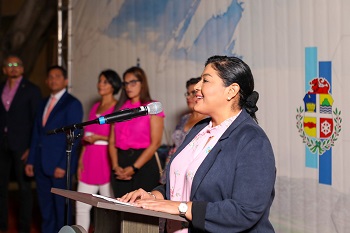 The Minister of Finance and Culture, Mrs. Xiomara Maduro gave a speech on behalf of the Government of Aruba on the importance of breast cancer awareness in Aruba. Breast cancer is associated with women, but it does also affect men. According to the Minister, it is essential to know our body well and to know early if there is anything wrong to seek medical attention in time.

Wearing pink is not only to create awareness but also to support all those who are currently fighting against breast cancer. The aim is to spread hope to those with breast cancer to keep on fighting the battle and recover. The wish is that one day there will not only be a cure for breast cancer but all cancers, the Minister said in her speech. 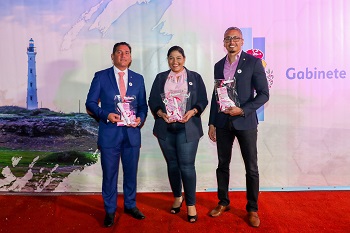 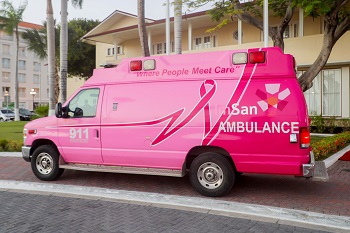 The Minister thanked the Mary Joan Foundation for its efforts in creating awareness about breast cancer and information about how to detect breast cancer. Often patients can be embarrassed to expose themselves to a doctor since it is a private part of the body. It should not be an embarrassment since it can save your life if detected early. It takes courage of each and everyone and if there is something wrong, please get it checked.

Many are afraid that a mammogram can be painful, or patients are embarrassed to undress in front of others. In addition to a monthly self-examination, it is essential to get your mammogram done when called to do so. 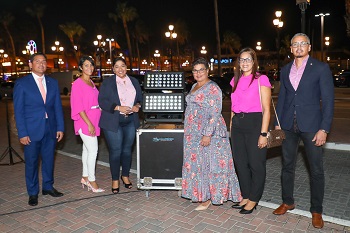 The Minister expressed her gratitude to the BOB Foundation, Queen Wilhelmina Foundation, the Edmund Harms Foundation, and those who work in the Public Health sector and are part of the process of finding a cure and prevention. The Minister is also very thankful to everyone for their donations, to the IMSAN for branding an Ambulance with pink colors, those involved with the awareness campaigns, and who show solidarity to all fighting against breast cancer. 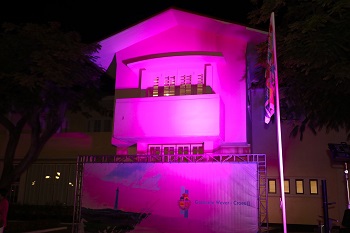 Minister Xiomara Maduro, Minister Ursell Arends, and member of parliament Alvin Molina, and the board of the Mary Joan Foundation lit the front of the Government’s building with pink lights to share the message to the community about being preventive. It also shows solidarity and support to those fighting against breast cancer, acknowledging that they are not alone. It also represents a big hug to help the patients surpass the situation and show them that the Government has them in their thoughts and heart.

After turning on the pink lights, the Ministers and Members of Parliament received a pin from the Mary Joan Foundation to recognize their support to the local and global awareness campaign about breast cancer.