The government extends its toleration policy for spearfishing as of August 1, 2022

ORANJESTAD – The Minister of Nature, Mr. Ursell Arends, announced that the government extends its current toleration policy regarding spearfishing.

The government planned to introduce the new spearfishing policy on August 1, 2022. However, to include all stakeholders in the process, the government deemed it necessary to extend the current tolerance policy while finalizing the new policy. On July 15, 2022, the Minister met with a large group of spearfishers and explained his intention to regulate spearfishing by law instead of prohibiting this completely. 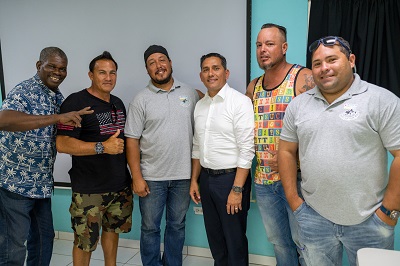 As agreed, Minister Arends had the opportunity to talk to stakeholders (professionals, authorities, fishers, and environmentalists about this regulation. The anglers appointed six persons to represent them in the sessions to complete the definite policy. These persons are active spearfishers who contributed with knowledge and experience to draft a policy accepted by the parties involved. The six appointed persons are Frederick Quandus, Marvin Thiel, Edward Dirksz, Bogdanovic Carolina, Jonathan Koole, and Aby Kock.

Based on the meetings with stakeholders and considerating the reports, treaties, and advice, the government concluded that spearfishing is one of the most sustainable ways of fishing as long as this is well regulated and enforced.

With the new policy, spearfishing can take place in a controlled fashion and in a way that promotes sustainability through cooperation, among other data collection.